If you are an Addams Family fan and are inquiring information regarding the real house that inspired the exterior look for the Addams home, was used in the 1st episode, and in a sense was the house exterior-wise for the 1964-66 TV series “The Addams Family” (starring John Astin as Gomez and Carolyn Jones as Morticia), then you’ve come to the right place.

“You mean “The Addams Family” house WAS real?!” 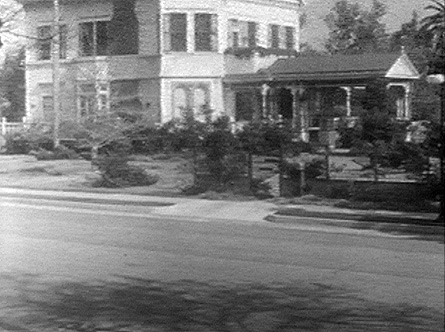 First off let me state that I am just a fan of the 60’s TV show. I don’t claim to be an expert, and I can only hope that the information that I have researched and discovered is in fact correct. Some facts regarding the house I still don’t know, so I am always open to suggestions or comments. In fact, I’d like to apologize for the ever-shifting content. This site is a work in progress and as certain facts are discovered, some of the content does change from time to time. I am doing this because I love the house so much, but also to help keep the memory of this famous house alive.

I’d like to thank and recommend Don Sloper’s book, called Los Angeles’s Chester Place “Images of America.” Looking back now I’m glad that I decided to read his book on the famous gated community before I embarked on this journey. Learning about the homes within and the surrounding area gave me a good foundation to start from. I have included a few pictures from Sloper’s book and credited him in the photo descriptions. I hope he does not mind, and I hope that he would consider this a good advertisement for his book.

I’d also like to thank Ruth Waldo Newhall, for “The Story of the Newhall Land and Farming Company”, Hometown by Handlebar, for Confessions of a love God: “I led two wives”, Mark J. Denger, Norman S. Marshall & John R. Justice (for their insight on Lieutenant Commander Morgan Adams’ Navy career), and Cate Austin (granddaughter of Paul and Helen Grafe; the final occupants of the house), who was so open and kind to share with us all some of her personal memories of the house, and of her grandparents.

A huge thank you also to the following (for all of their help and support in this endeavor), Duncan Maginnis  The Underappreciated Legacy of Historic Los Angeles, Ronny Kellum, Kansas Sebastian, oldhomesoflosangeles, Matt Hardesty, gilroytg, Guido Ligorio, Stuart Armstrong and Nick Cook. A posthumous thank you to Henry G. Newhall (for this glorious structure), David Levy (for creating “The Addams Family” 60’s sitcom), Louis McManus (for creating “The Addams Family” house), and last but certainly not least, Charles Addams.

I started watching “The Addams Family” during syndication as a kid in the 80’s, and remember my stepfather telling me the first time I had watched it that he had also watched the show when he was younger; which initially sparked me to first inquire (especially since it was filmed in Black & White), “just how old is this show?!” After watching it on a daily basis after school for a while I became fascinated with the show, but more than anything I became fascinated with their house. Being a kid (and obviously naive), I did think that the house was real for a short while. I knew that it was a show and it was being filmed for TV, but I thought that they were filming it in a real house….that house; that beautiful three story, Second Empire, spooky old mansion (or maybe I just wanted to believe).

As I continued to watch more episodes as time passed I soon realized that the house was a painting/picture, and the show was filmed on a Set. Needless to say I was disappointed that the house wasn’t real, but I still loved the show. Looking back now I think discovering that there wasn’t a real house standing somewhere that actually looked like that, sort of fueled my interest in the show as a teenager. I started drawing pictures of the house with floor plans and fantasizing about building and owning a house exactly like that. Then one day they showed the very first episode again which I had not seen before, and I discovered that there actually was a real house (although not a Second Empire)!

Years later when the internet came out it opened up a whole new world for me (for us all). In the early days though there was very little on the internet about the house, and as time passed my attention went in other directions. As fate would have it many years later though while doing another search, I happened to stumble across a message board that contained a post about the real house; it sparked my interest and fondness in the house again, and I officially began my research.

During research on the house I came to realize that there are a lot of other people that also love and obsess over “The Addams Family”, and the cult following of fans of the 60’s sitcom; as well as the continuous fan clashes over ‘The Addams Family VS The Munsters’, that keeps the two show’s legacy alive, Halloween after Halloween. After all these years I think I am more obsessed with the show and the house than ever, thanks to the people that have shared their pictures and knowledge of the house with everyone (including me). I truly appreciate it and wish I could thank all of you, but some people I don’t have names to credit.

So, without further ado, here is my contribution of what I have learned regarding the real house that inspired the exterior look for the Addams home, was used in the 1st episode, and in a sense was the house exterior-wise, for the 1964-66 TV series “The Addams Family.”